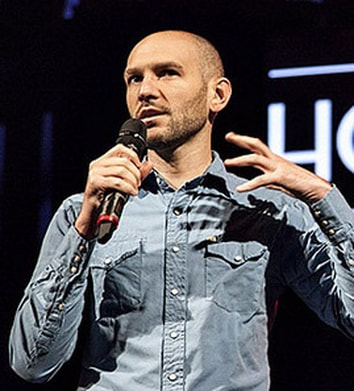 The Washington Post says, "With Underground Comedy, Sean Joyce has created a D.C. comedy empire. The [6]-year-old independent comedy production company, which hosts stand-up shows in at least six venues, has become popular among national touring comedians, and D.C. gets to reap the rewards. Most of the shows are either in bars, like The Big Hunt’s tiny satanic-themed basement, or at Drafthouse Comedy downtown. Over the years, Joyce, a stand-up himself, has built a network of comedians who want to play his shows, and there’s always a good chance you’ll see a rising star who’s about to break out big (or one of the top talents in the District). Established comics seem to like the looseness and intimacy Joyce fosters. Michael Che worked his recent Netflix special at The Big Hunt before filming it; so did Rory Scovel. Hannibal Buress, Patton Oswalt, Judah Friedlander and Louis C.K. have all dropped in for surprise sets. That’s the magic of an Underground Comedy show: You never know who might show up, but you can guarantee it will be funny."

Sean has been performing stand-up comedy in the D.C. area for years at venues like the Kennedy Center, Lincoln Theatre, Howard Theatre, 9:30 Club, Black Cat, Rock & Roll Hotel, and as part of the Bentzen Ball, 202 Comedy Festival, District of Comedy Festival, and Capitol Fringe Festival. He has performed with comedians like Nick Swardson, Demetri Marin, Eugene Mirman, Michelle Wolf, and Michael Ian Black.

"He's a funny guy and he hustles and he's doing great things for that scene." - Joe List

“Sean Joyce’s laid-back style is an excellent way to ease yourself into the stand-up world. Comforting and confident, Joyce and others from Underground Comedy DC are doing a service for the comics and audience members of the District.” - Brightest Young Things

"Sean Joyce balances out the [show] with his dry and biting comedy stylings. His bits about dating and couples counseling cut right to the heart of the biggest romantic contradictions in the age of Tinder. Joyce smartly channels the angry id of every 20-30 something guy who’s ever been in a fight with his girlfriend, and I, for one, enjoyed it immensely." - DC Theatre Scene

"Sean Joyce hosts and produces some of the city's most reliable stand-up showcases." - Washington Post